It has been two years since I moved to new studio. It’s located in an industrial area in eastern Prague.
I like to come there in the afternoon. Arriving this late means that by the time I’m on my way home, most of the other occupants are already gone. The area, which s usually full of busy and noisy people during day appears strangely quiet at night. This silence doesn’t seem absolute though. It’s as if one could still hear distant echoes of what was happening during the day. I wanted to capture this atmosphere. And to do it succsefully I had to paint outside – in plein air. I was freezing. I couldn’t remove brushes from my icy fingers. Colleagues from other studios were shaking heads while telling me I was crazy. But I know, that some things that are right can only be achieved through struggle and discomfort.  So now I have this small series of nocturnal paintings and I’m glad. 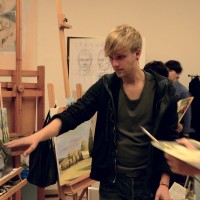